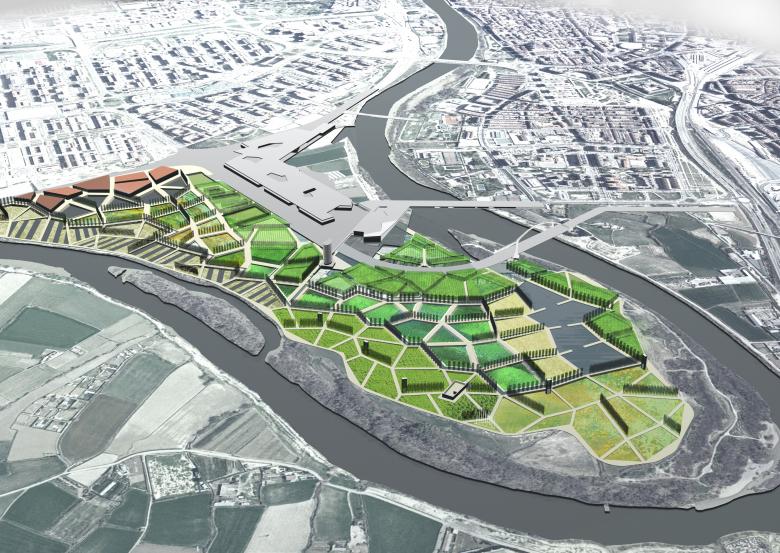 The park is organized according to lines of flows that connect the urban itineraries of the streets of the adjacent neighbourhoods. For to draw their roads, paths and channels we imagine them to reflect the people -in groups, in masses, in rest or in movement, by the roads and in the spaces that are established.
An urban park needs a characteristic framework that identify it formally and that at the same time distinguishes it substantially from the adjacent agricultural structure.
An equipped metropolitan park of rank should be identified like a piece more than an urban collage of the contemporary city.
In the Avenida de Ranillas with the industrial zone Actur the nucleus built of access is situated by the Park, the buildings of the Botanical and Thermal complex; bordering the Ronda del Rabal, area for parking and sport, for encounter with the buildings of the Expo.
The plot integrates the different elements of the program in a same formal structure. Thus the physical estrangement or interruption that is produced by the curvature of the Ronda del Rabal is avoided, or the one that would be produced by an element such as the channel of white water or the lake, and the connective facility between uses is promoted and flows of the Park. The plot also permits the subdivision in environments as the Botanical Garden or the Gardens of the Termas, which require greater complexity expositive (p. e. variety of orchids or lilies).