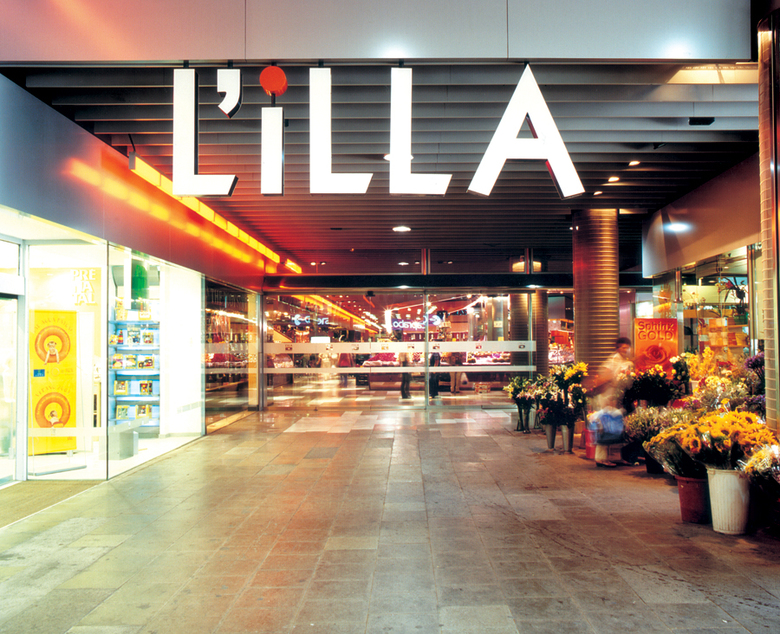 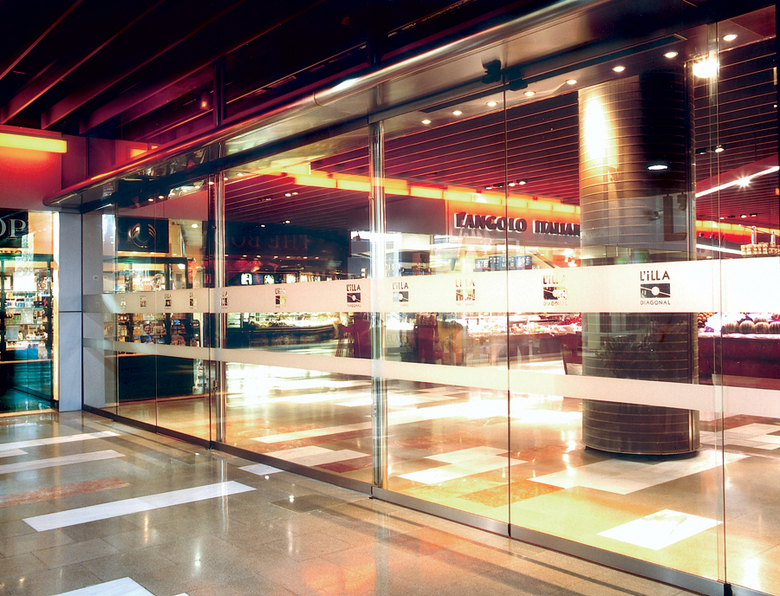 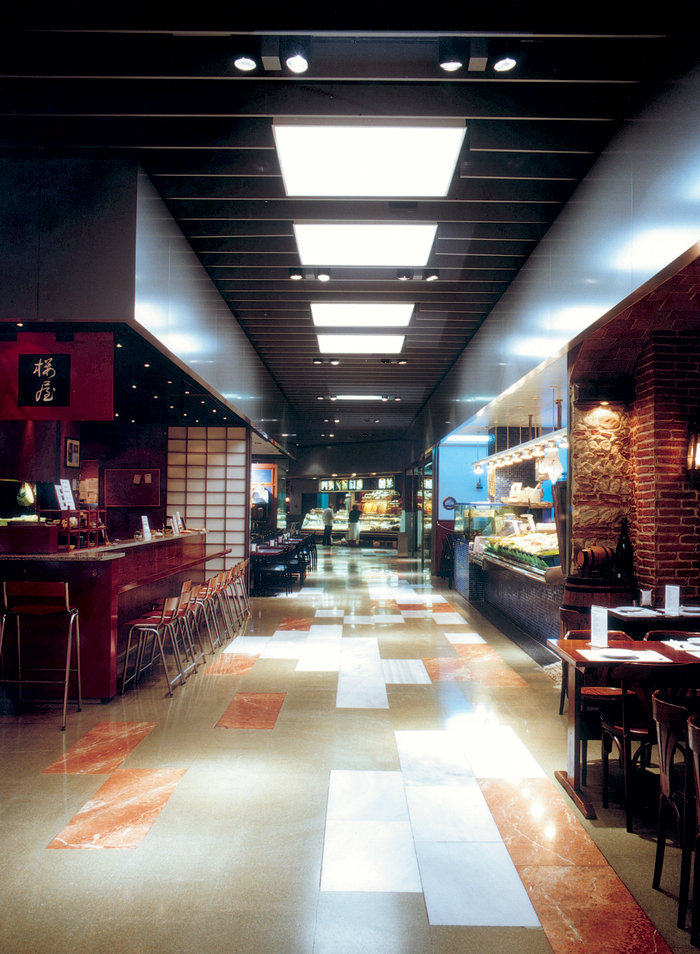 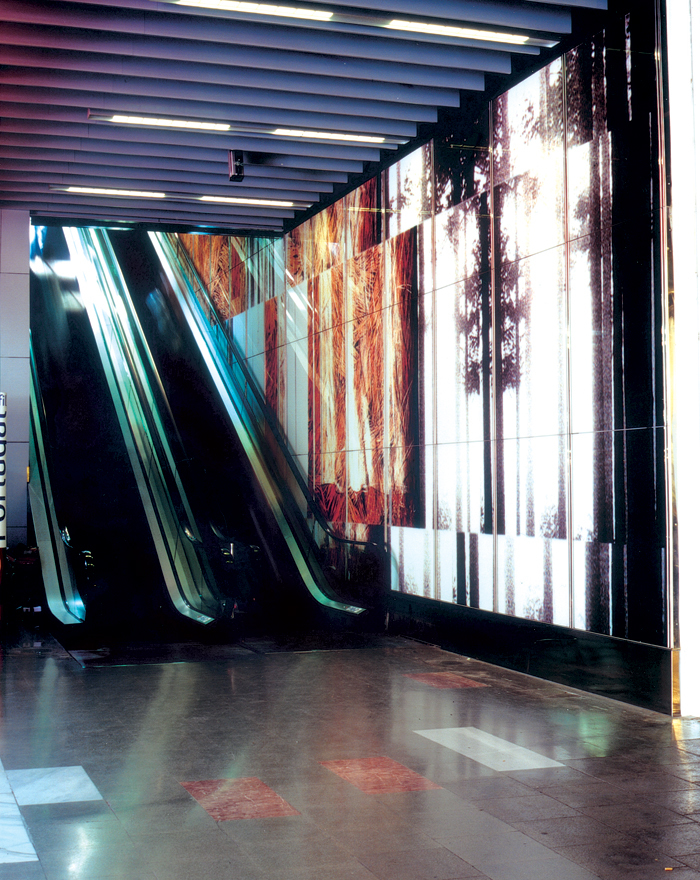 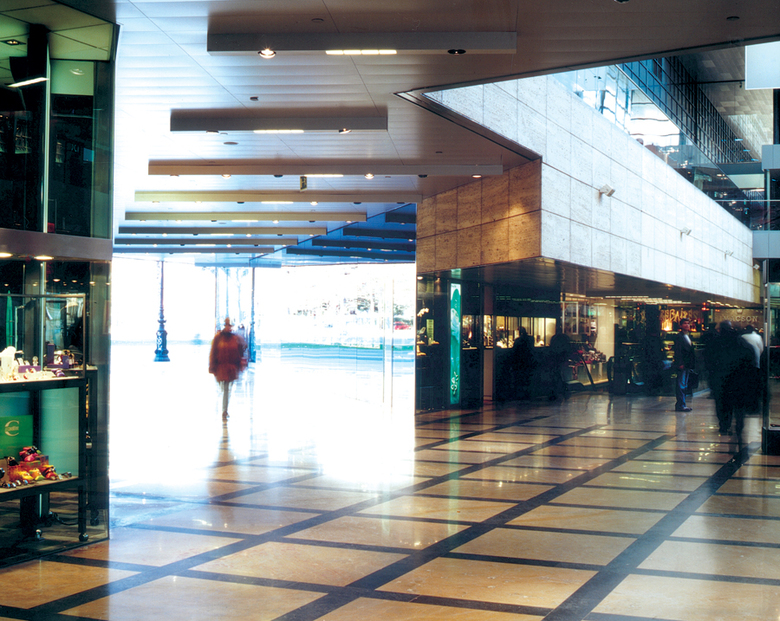 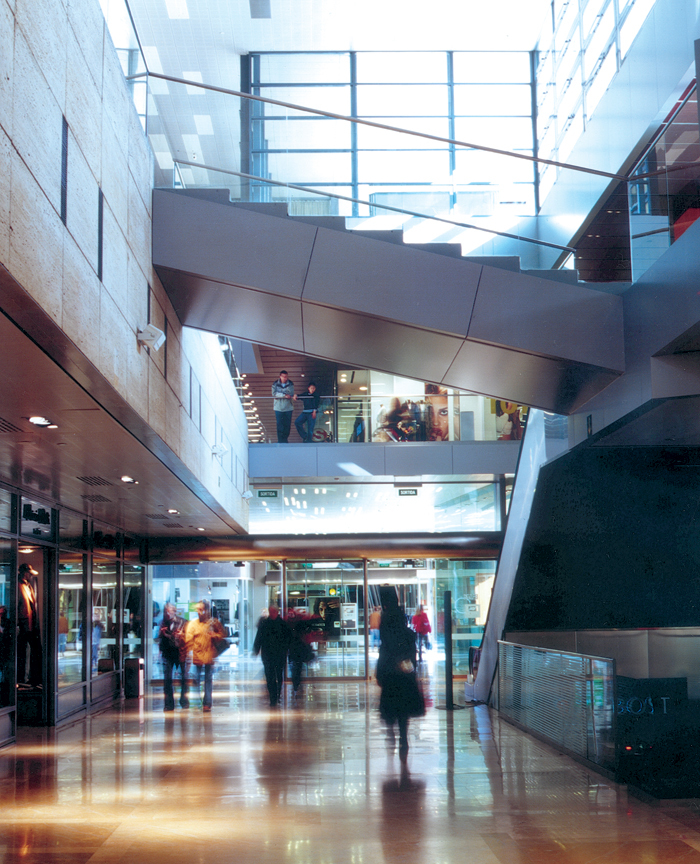 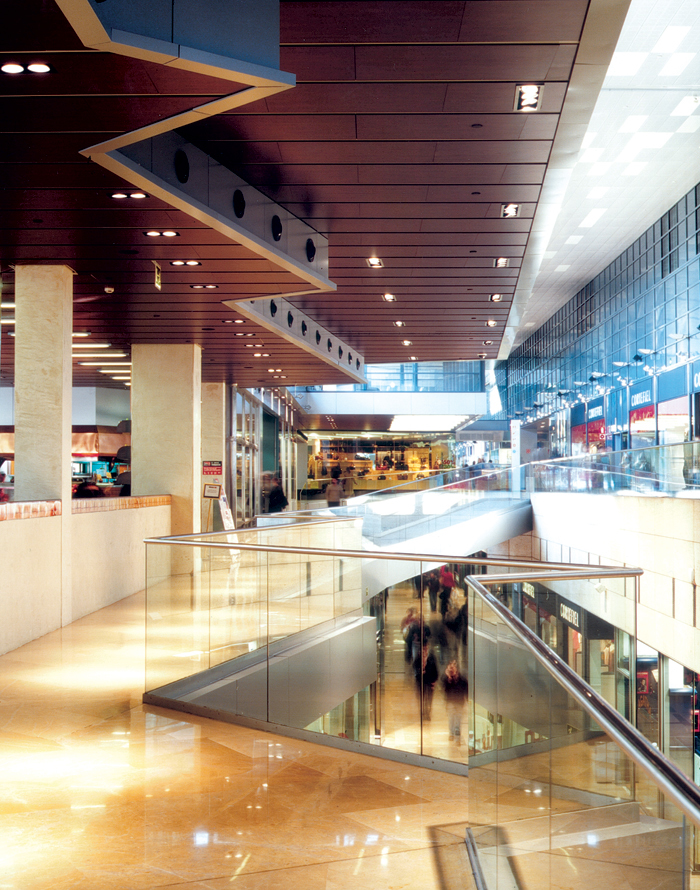 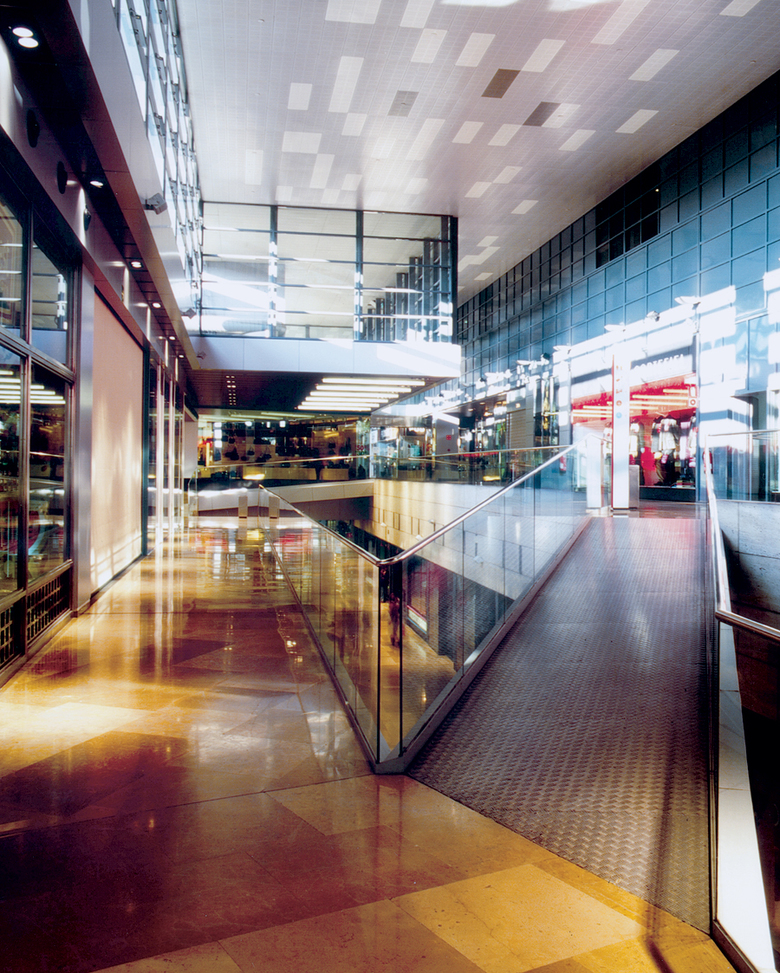 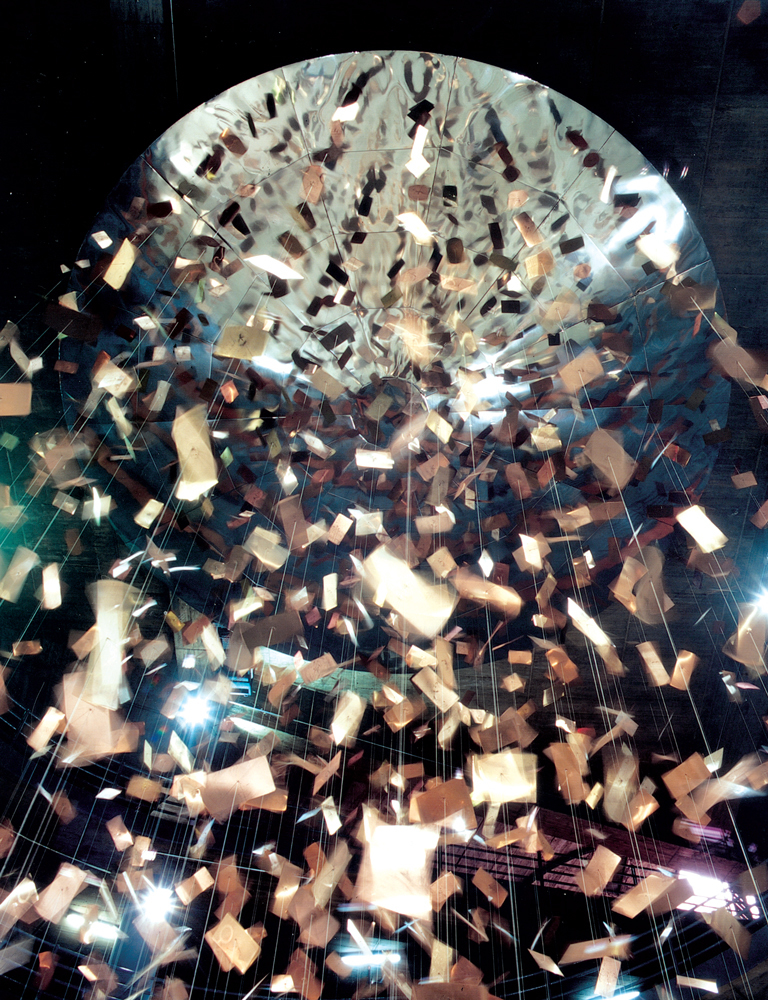 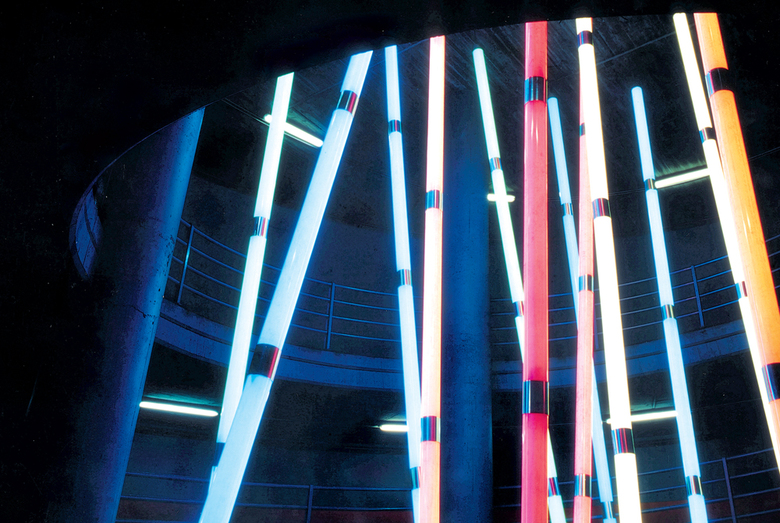 Fruit of a restricted bidding process to celebrate the tenth anniversary of its opening, the two mottos of “sewing up the wound” and “bringing light into the cave” seemed to us to be the fundamental axes of renovation of the basement floor. Or in other words: overcome the barrier imposed by the street that separated the “Caprabo” supermarket from the shopping center using a lighted profile that lined the area from end to end, and make the basement an illuminated floor using lights which use sensors to reproduce the outdoor light and its chromatic variations. Everything was redesigned, from the stainless steel mesh liners, the advertising opis on the “escalators”, the new automatic doors rising from 2.1 to 2.8m in height, to the siding which will end up covering the center. A lighthouse, in the main entrance off of Diagonal, reinforces the center’s island character, as well as a huge suspended lamp to convert the “plaza” into a place where things are always happening, the “envelat de poble”, and the village festival lights. The ceiling was painted black and we discovered we could make it disappear and thus help us to focalize attention to shopping, the true protagonist.

Finished the work of El Rebost, we recibed directly the comission to reform the rest of the center, including the Training Center Winterthur Auditorium and access to parking, which sought the metaphor of an island which is to configure each of the accesses. And so we have projected light and water with a kinetic sculpture that own cars with their headlights illuminate in its upward and downward movements, a cascade of solidified water, converted into a double installation of optical fiber, a surface tension that reflected in the roof movement of a waterfall, into believing that, on leaving the center, go out from under the water ... and a lush bamboo forest, made of neon, with all the colors of our hope.