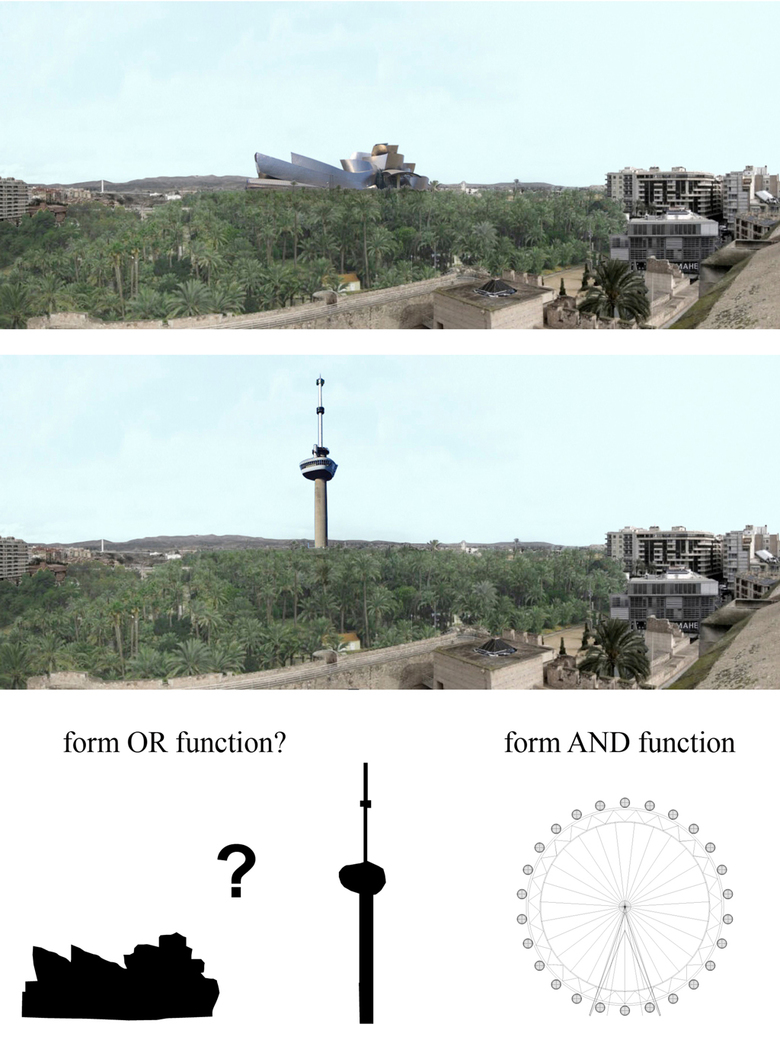 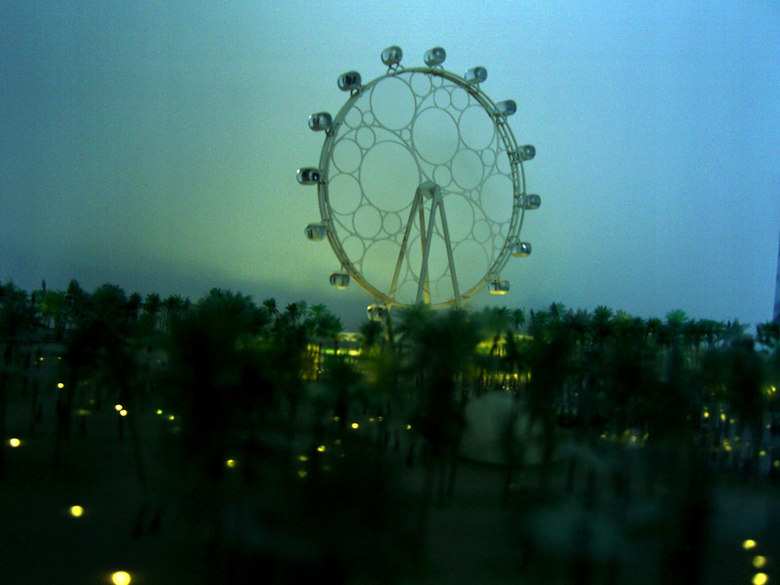 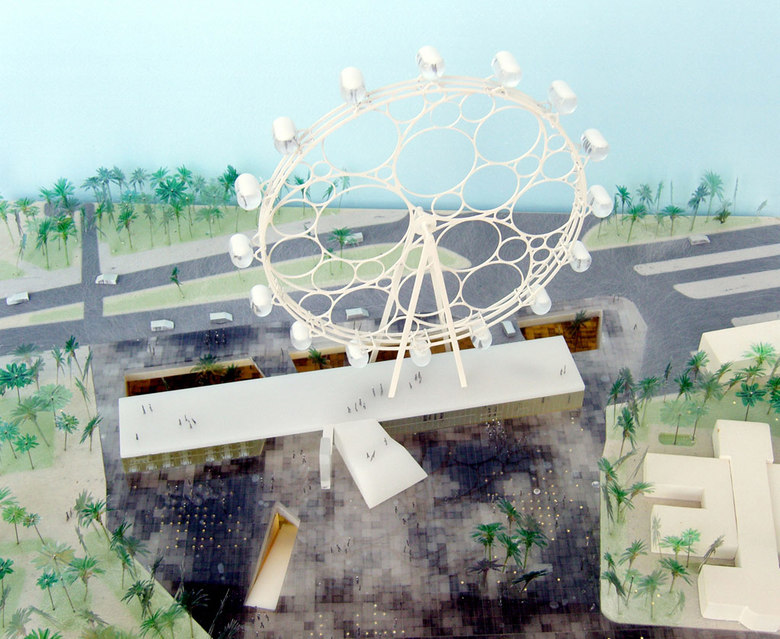 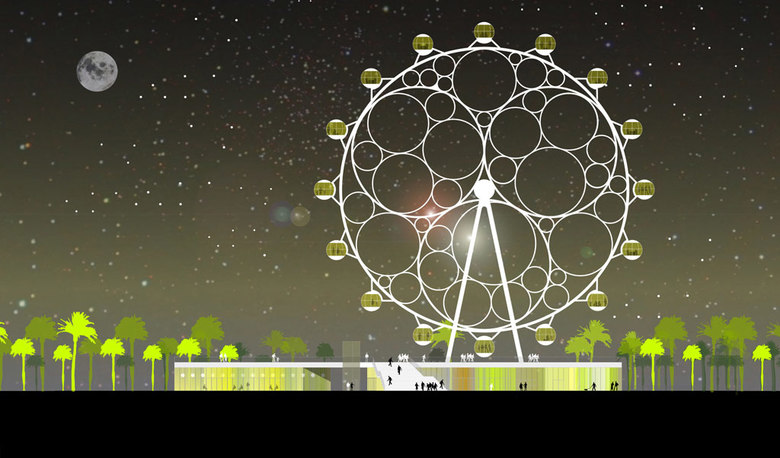 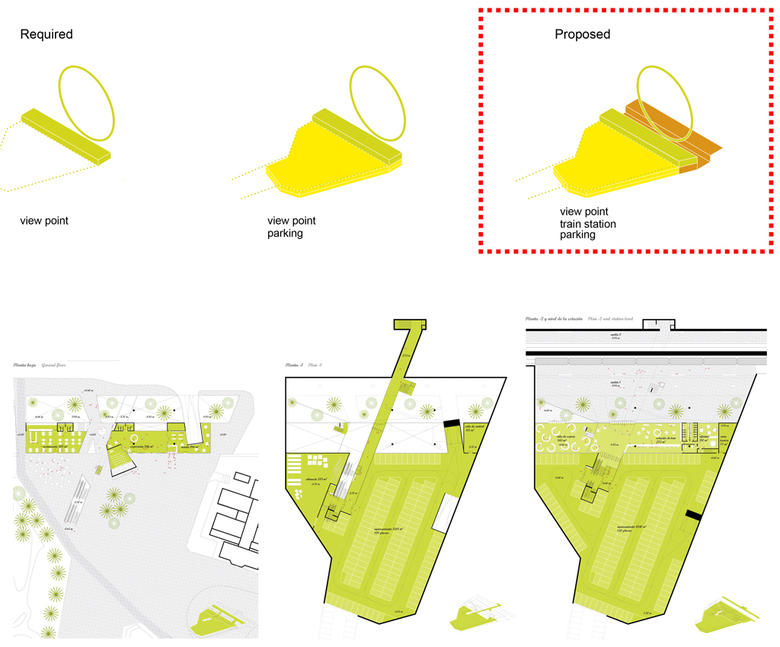 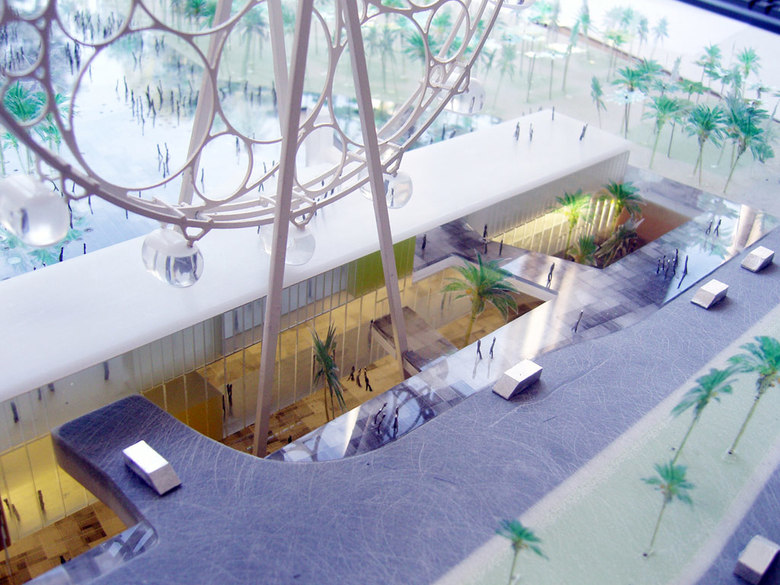 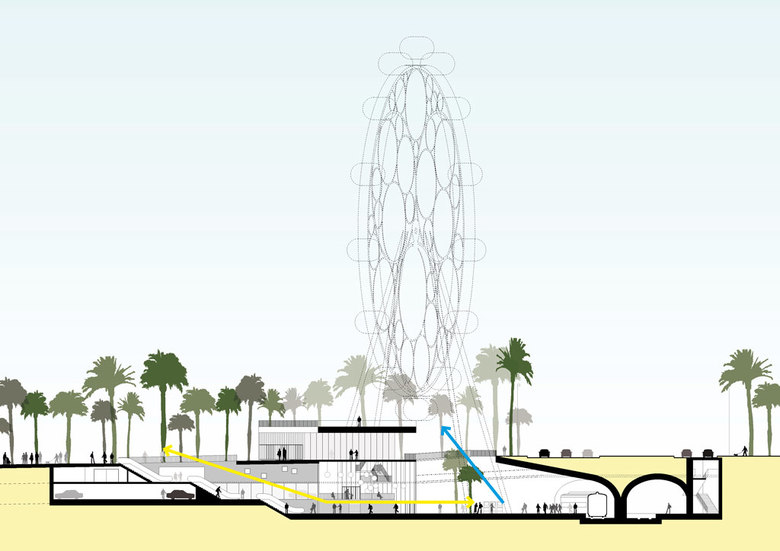 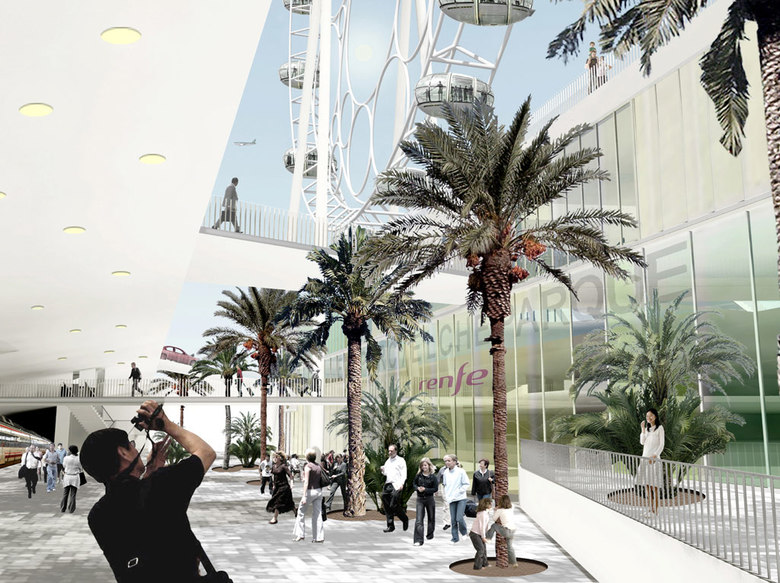 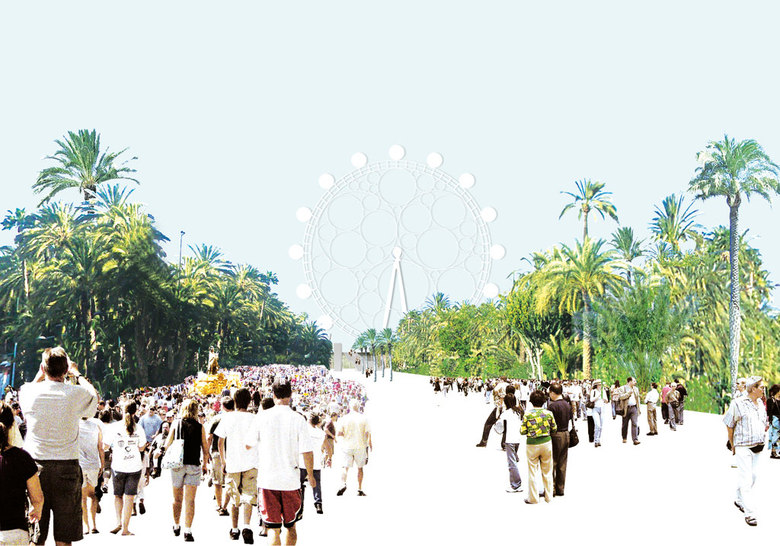 The Design of an Oxymoron.

Thousands of words have been written about the influence of the current economic crisis on the business of construction. However, we think that this event has accelerated the birth of a new form of architectural thinking that, when applied to architectural production, will generate intelligent and substantial ideas, and leave behind the sensationalistic architecture of quick consumption. We believe more than ever that strategies, rather than shapes, are the only valid answers to the demands of the city today. The Mayor of Elche organized the competition with the requirement that the project should “provide the city with an EMBLEMATIC element to contemplate and promote the Palmeral of Elche” (from competition brief). This raised the challenge of designing a humble icon, which is a real oxymoron. How to design an icon with the purpose of deviating attention towards something else?

In our careers as architects the competition for the Mirador del Palmeral was first chance we have had to create an emblem for the city where the landscape plays a crucial role, and where the admiration of this landscape is the raison d'être of the icon.

Moreover, in this period of financial collapse and extreme preoccupation with sustainability, it would be hypocritical to close our eyes and produce another icon like all the previous ones. Let’s take this chance to think deeply; to focus our intelligence on a strategy rather than on the egocentric and frozen architecture (icon) so characteristic of the past few years. The cultural landscape of palms that constitute the Palmeral of Elche dates back to the 10th century, when much of the Iberian Peninsula was Arab. This great patchwork of agricultural plots (huertos) was listed as a UNESCO World Heritage Site in the year 2000. The palm grove extends over approximately half of the area of the city. Due to the loss of its original use, it is becoming more difficult to integrate the Palmeral into city life. Apart from some huertos that were transformed in parks (losing their initial configuration in the process) they remain empty and are deteriorating. Most of the Palmeral, mainly the most authentic parts, passes unnoticed to inhabitants and tourists, who misunderstand that the real value of the palm grove is not in the palm itself but in the ordered system of its plantation. There is not a single viewpoint in the city where the huertos system of palms can be seen and understood. The highest public point is the tower of the Basilica, but from there the Palmeral is mistakenly understood to be a random forest of trees.

Within certain precautions that apply to acting on a World Heritage Site, UNESCO supports interventions that enhance the universal value of the site. We believe that by building this viewpoint, for the first time in Elche, tourists and inhabitants will be able to understand the Palmeral as a system of huertos, and recognise its strong presence in the city. Although the intervention should not eclipse or even compete with the importance of the Palmeral, it should be significant enough to attract tourism and regenerate the economy of the City.

So, we searched for an atemporal emblem; intelligent and flexible; capable of fulfilling these requirements within a budget of €10 million. We need an imaginative solution. We propose a wheel for Elche. The wheel is a strategy. The wheel is resistant to fashion, style, and time. Its assembly is completely reversible and therefore does not have any permanent impact at the points where it touches the ground. As the wheel does not consume the total budget, we can also invest in the creation of adjacent public spaces. Moreover, with money made by selling tickets for the wheel, it is possible to recover the initial investment in less than three years. The wheel is an intelligent and rational structure; representative and beautiful, powerful and transparent.

The Wheel is the perfect union between FORM and FUNCTION.

Mirador + Station, the greatest welcome in Elche. To explore the full potential of the intervention we propose three scenarios with different levels of investment. They range from the initial requirement of a single Mirador (viewpoint) project to a common building, housing the Mirador and train station, with a connection to the train platforms and the underground parking.

Our design places the Mirador at the former site of Elche’s Train Station, which was demolished in the 70s. The new train station was built on the same avenue, 100metres to the East. The spatial quality of the building leaves much to be desired, and it is in poor condition. There is a planned investment, already in place, of €6 million for its renovation. We believe it does not make sense to invest in that building; rather we propose a much more efficient and comprehensive operation. We plan to make a common investment of €16 million, together with the budget for the Mirador, for a new common building where both programs can benefit from shared functions. This idea is feasible because the project is located within the double platform area of the train tunnel. In this way, the Train station comes back to its original place: to the end of the Paseo, which it is named after. The Mirador and the Palmeral will be the image of arrival in the city.

Strategy in the immediate surroundings:

Re-creation of Elche’s Palmeral As we don’t consume the entire initial budget with the Mirador we propose to invest the rest on the creation of a big public space in the current Paseo de la Estación, and a big square in place of the current traffic roundabout in front of the new Mirador-Station.

From the beginning of the 20th century until the ‘60s this avenue was an elegant elevated Paseo Salon where the inhabitants of Elche enjoyed walking. It formed the main connection between the Train Station and the City centre. With the prominence of the car in the 60s, the elevated Paseo was demolished and transformed into a three lane road. This, along with the displacement of the train station, damaged the character of the Paseo as a civic public space. After studying the current traffic patterns in the area, we propose restricting vehicular access to public transportation and bicycles.

Once the Paseo is free of cars not only do we improve the sequence of public spaces in the North-South axis, the spaces between the city and the new Mirador+Station, but we also link the two parks that are currently disconnected in the East-West axis. Both parks are former palm huertos. This operation will bring the area enormous potential as a public space right in the centre of the city. The construction of the Mirador-Station to the North of the Paseo will frame the views and will place the station back in its former location.

We propose to keep the Paseo as a “hard” surface due so that it will be able to host a large number of events, which would be impossible in a green area. Moreover, due to the dry weather of Elche, a green Paseo would require a significant amount of maintenance. We have minimized the Paseo’s design to avoid compromising its potential. This design will only affect the surface; we have created a great carpet of tiles representing a pixilated aerial view of the Palmeral. This large mosaic will be visible from the wheel, as an enormous piece of urban art.

House of Arts and Culture

The Re-Creation of the European City - Urban Shopping list for Secondary Cities.