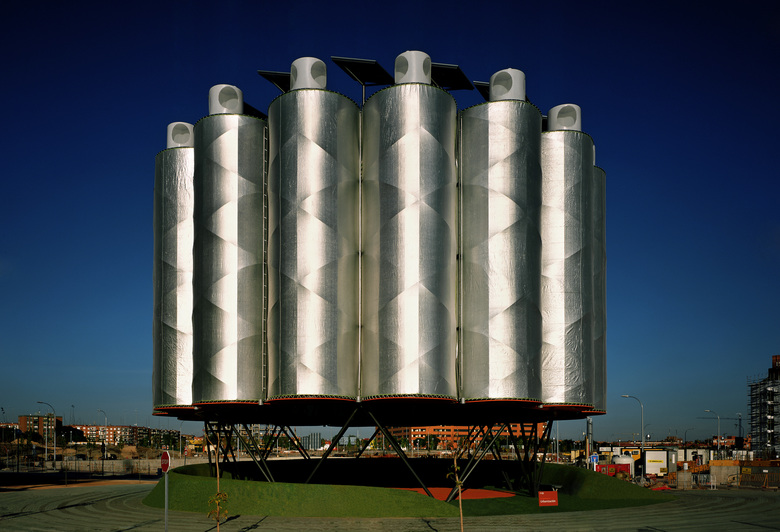 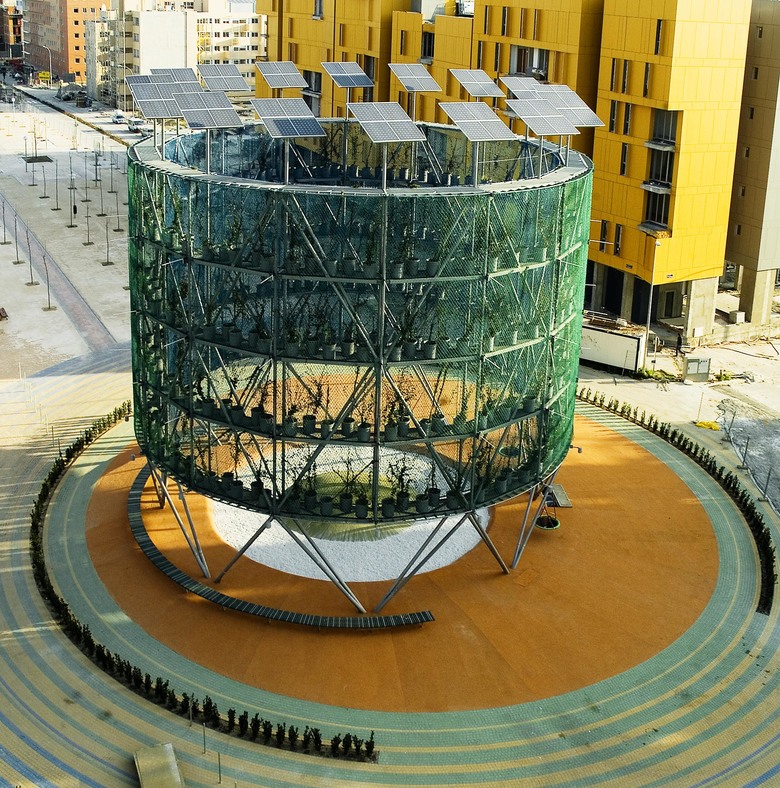 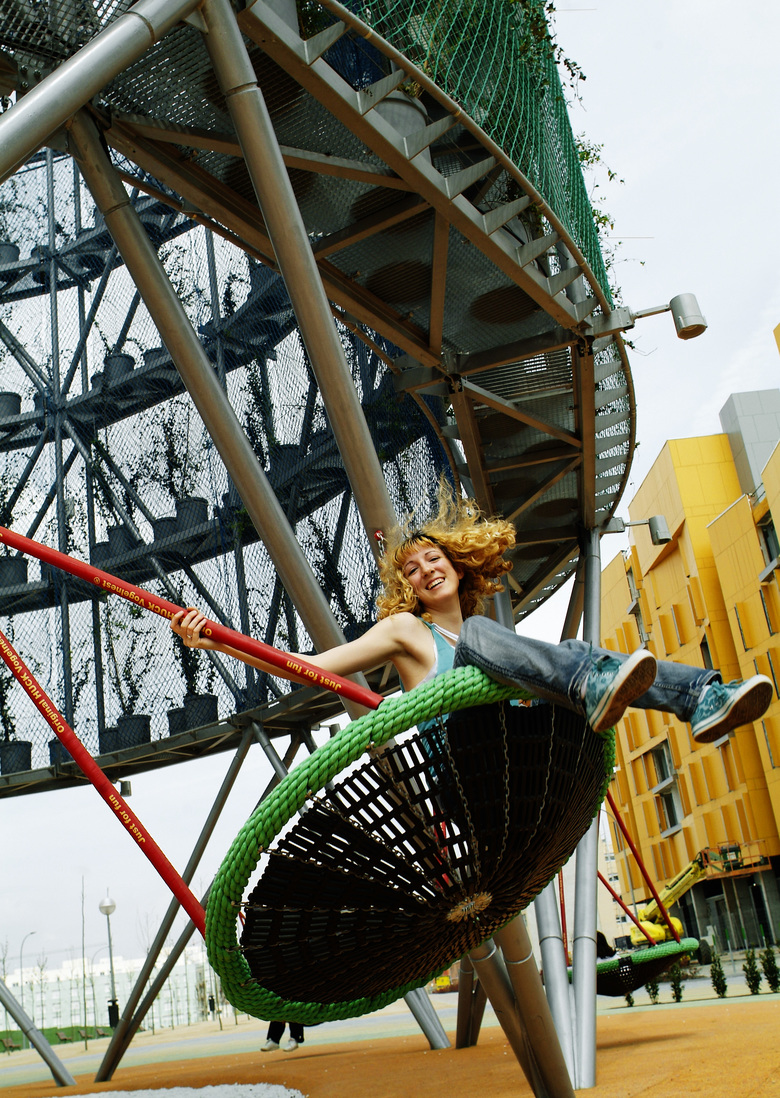 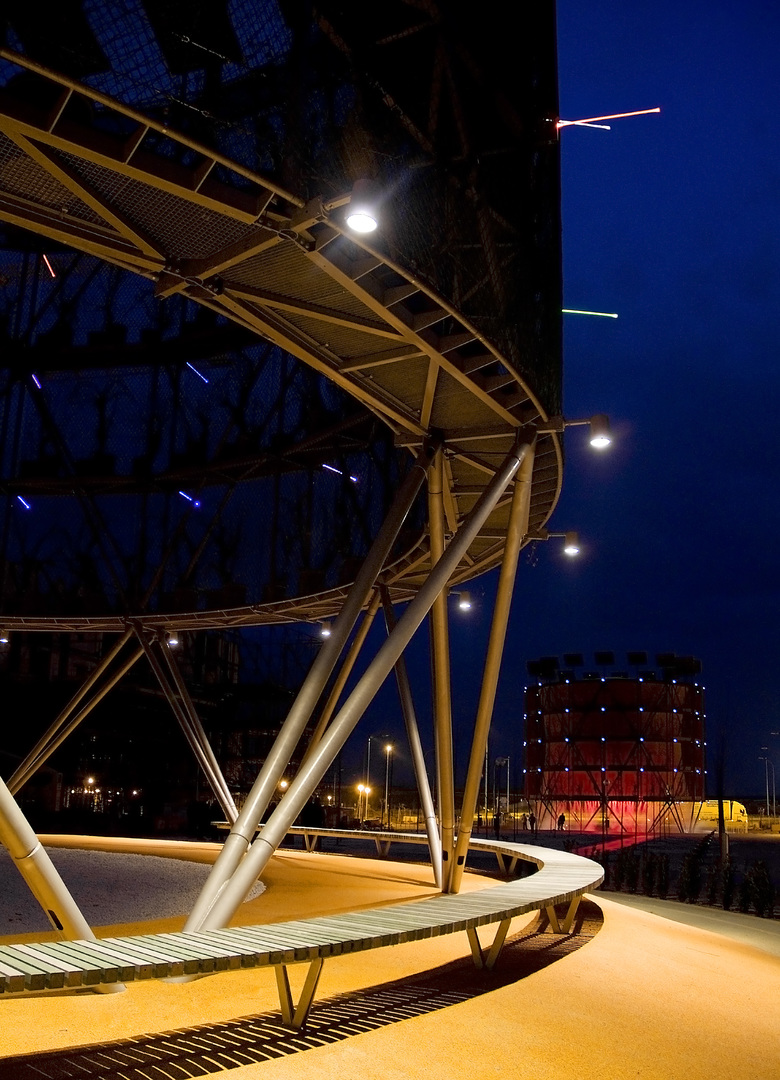 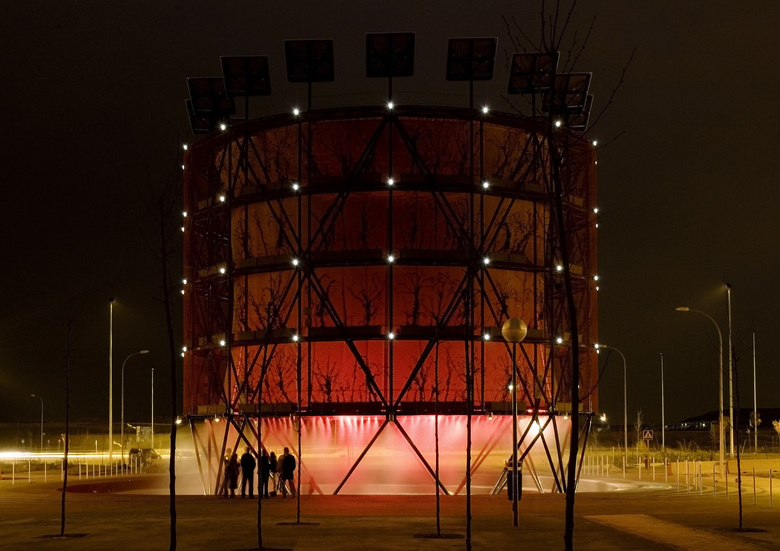 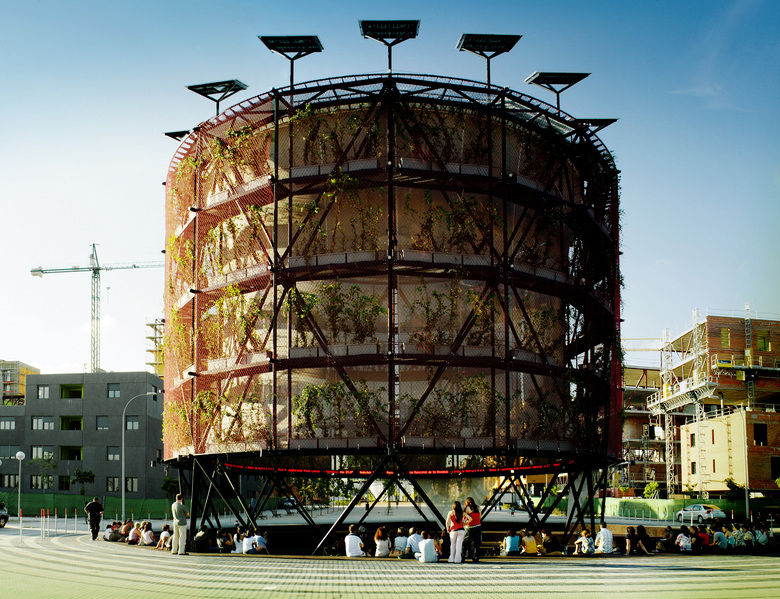 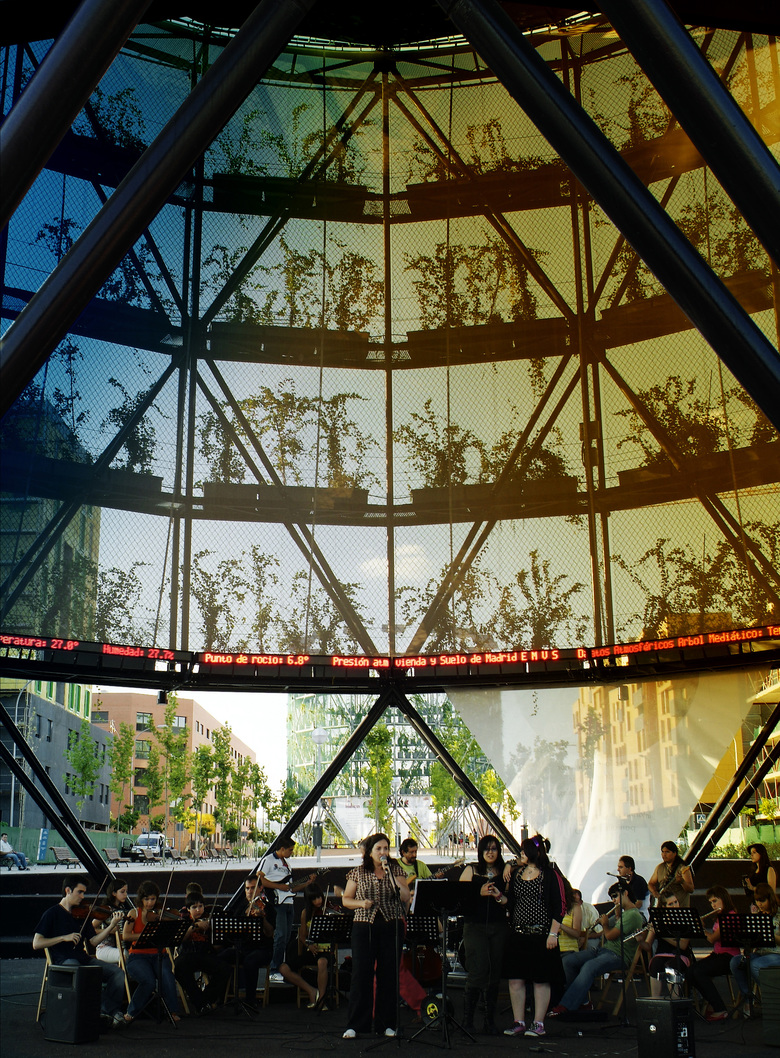 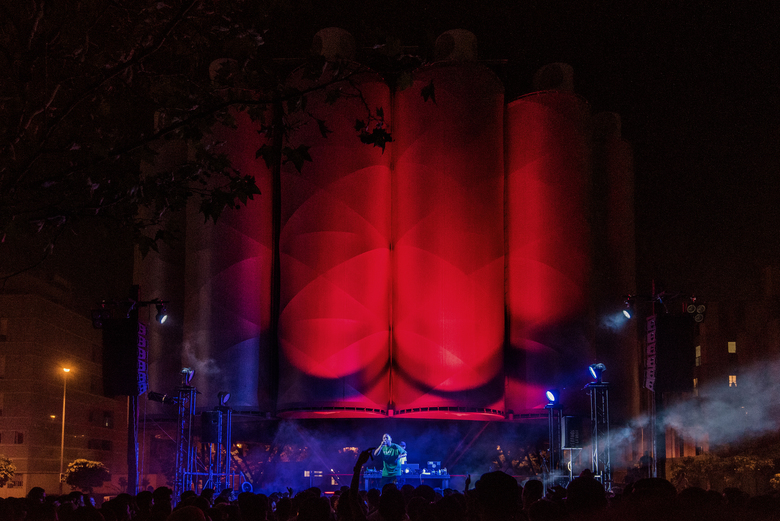 The Eco-boulevard in Vallecas can be defined as an urban recycling operation consisting of the following actions: insertion of an air tree-social dynamizer over an existing urbanization area, densification of existing alignment trees and reduction and asymmetric arrangement of wheeled traffic circulation. Superficial interventions reconfiguring the existing urbanization (perforations, fillings, paint, etc.) that defaces the executed kerb development.
There are two main objectives: one of a social nature, aimed to generate activity, and one of an environmental nature, the bioclimatic adaptation of an outdoor space, achieved with a system of passive air conditioning based on chilling by evapotranspiration.
This system, commonly used in the green house industry, is capable of lowering temperature by around 10º C, depending on humidity conditions and temperature. The system goes into action when a temperature sensor detects temperatures above 27ºC in its surroundings. It is particularly efficient with high temperatures and low relative humidity (typical conditions in Madrid during the summer).
The Air Trees are objects of an exportable nature, so they may be re-installed in similar locations or in other types of situations requiring an urban activity or reactivation.

RECYCLING THE NON-CITY
The Suburban Development of Vallecas had all the very poor characteristics typical of suburban developments. So, the Eco-boulevard competition is organized with two objectives: one of a social nature, aimed to generate activity, and one of an environmental nature, the bioclimatic adaptation of an outdoor space.
Public spaces belong to everyone and they should act as supports for a number of activities and events, beyond what can be planned, spaces where citizens can act in freedom and spontaneously. Our proposal is an attempt to make up for the total lack of activity due to irresponsible planning, and it originates in the interest in finding a solution to the problem from the very beginning. We are aware that the best adaptation for a public space is that involving thick and solid trees, a material that cannot be counted on until 15 or 20 years have gone by. Therefore, it was necessary to have an “emergency” action that could operate as a wood would in the future. So, the strategy opted for is one of concentration that acts on and adapts specific areas by supplying them with higher climatic comfort and serving thus as the seed of a public space regenerating process. We do not think a building is necessary, but a place for people whose shape is defined by the very activity developed in it at a given time. Three pavilions or trees of air work as supports open to multiple activities chosen by the users. Installed in the non-city as temporary prostheses, they will be used only until the inactivity and climatic adaptation problem is corrected. Once the necessary time has elapsed, these devices should be taken down and the old premises should remain as clearings in the wood.

The air tree is a light structure that is self-sufficient in terms of energy and can be dismantled. It consumes only what it can produce through photovoltaic solar energy collection systems. Selling this energy to the power network generates a superávit on the annual balance sheet and this is reinvested in the maintenance of the structure itself. This is just a model for the management of resources on a project in the course of time.

The use of technology plays on this project a critical and decisive role as it adapts to an authentic and specific context. The architectural potential of technology lies on its reprogramming and combination with other elements, so that true architectural ready-mades are configured. In this case, climatic adaptation techniques normally employed in the farming industry are borrowed.

The autonomy enjoyed by the trees of air means that they are objects of an exportable nature, so they may be re-installed in similar locations or in other types of situations requiring an urban activity regeneration process (new suburban developments, degraded parks, squares).
The goal of this project is to create an atmosphere that invites and promotes activity in an urban public space that is “sick” due to “bad planning”.

The simple climatic adaptation systems installed in the trees of air are of the evapotranspirative type, which is often used in greenhouses. This aerotechnical practice or artificial adaptation is not a part of a commercial strategy. On the contrary, it tries to undo the leisure – consumption binomial and reactivate the public space by creating climatically adapted environments (8ºC–10ºC cooler than the rest of the street in summer) where citizens will be once again active participants in public spaces.