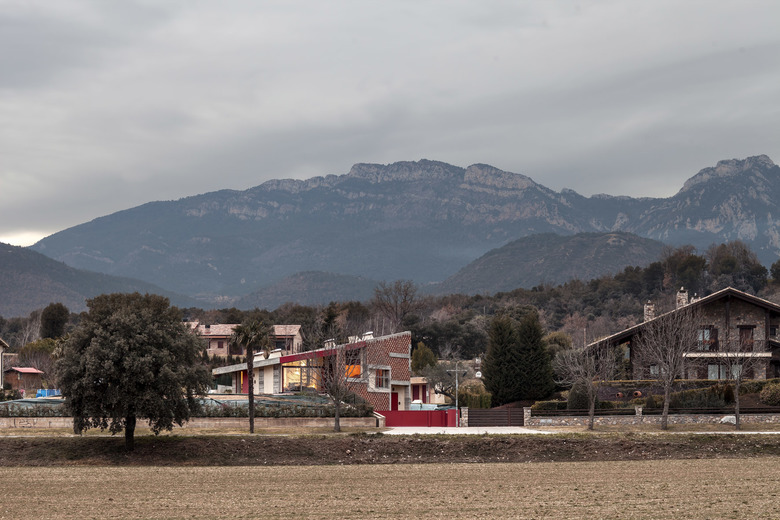 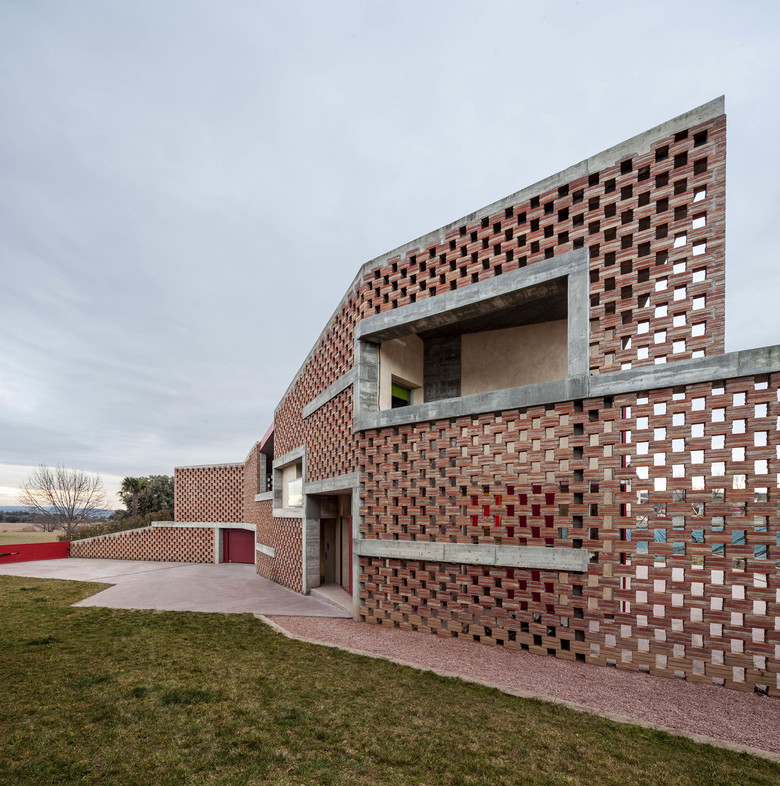 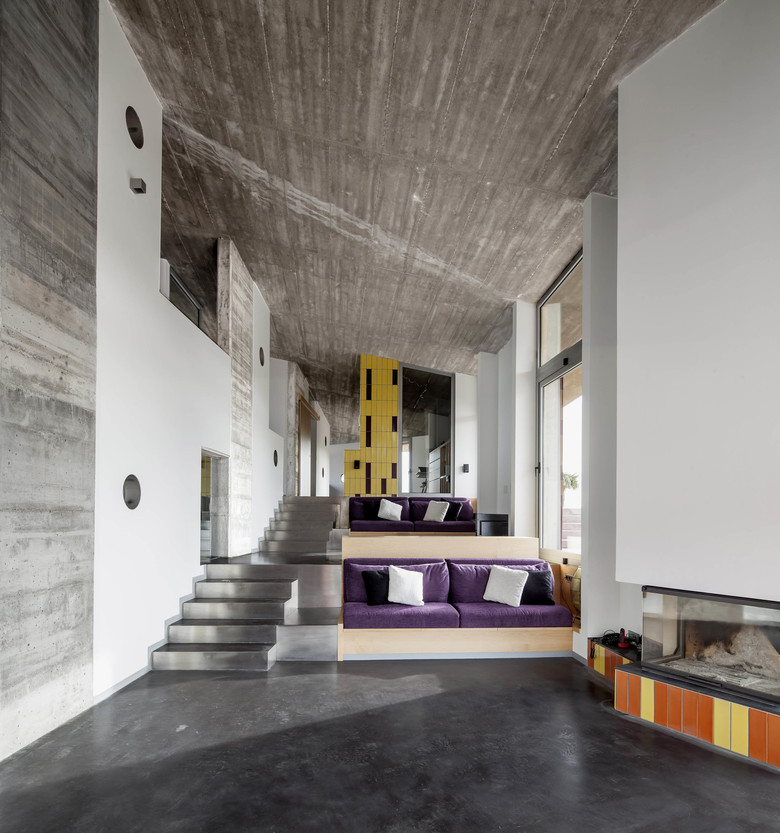 Bitxo House stands on the gentle hills of the Pre-Pyrenean landscape of Graugés, a hundred kilometres north of Barcelona, in Catalonia, with the Queralt mountain range at the background. It is located in a suburban area between “mountain style” houses.

The owners, Xavier and Queralt, both of them musicians, acquired, about 20 years ago, a plot to fill the stave of life with their music. Over time, without rush. The design and construction of the house extended for over ten years.

In contact with the ground, the lines of the stave get broken, absorb the trace of an old path and set a diagonal on the site, which then serves to structure a hierarchic process, adding elements and processes. Such traces are used to actually think the house, and afterwards, build it, with an expressive concrete structure organizing a brick lattice, and a single slope roof below which all spaces are marked out by free-standing bodies lined with colourful glazed ceramic.

Besides being one of the few materials allowed by the restrictive local rules, brick also links the house to the ground, an emerging wall of the clay attaching the house to its roots, despite its unconventional geometry.

Starting at the entrance, below the lattice, the spaces and rooms are arranged, structured along the trace, in a spiral movement that initially follows the natural slope with a ramp leading to the kitchen, and a double-height dining and living rooms. The ascent continues, with half height levels to tight the spaces against the concrete slab of the roof in correspondence to the privacy of the main and secondary bedrooms and service rooms. The end of the walk, completed only in the project with a fireman’s pole, leads to the playing room for children, redundant element for the whole house is, in fact, their playground.

The Bitxo House is the unpredictable result of a predictable and restrictive legislation, which regulates the creation of any new architecture to be presumably erected in a respectful manner towards the site and the traditional buildings.

However, a stone or ceramic façade, a traditional tile roofing or the local pastel colour chart, as set in the local regulations, are not enough to mimic the environment, nor to create an architecture to be an "expression of its time" as pursued by modern culture since the early twentieth century.

Bitxo House is a research on these conditions of start: if the materials are set by the regulations, the geometry expresses itself as a powerful tool to turn round. The house is positioned perpendicular to the street, with a single slope roof that reduces the front façade to a large window. The house bows to the street opposing to the acts of assertiveness of the proud neighbouring facades. Instead, the main volume is concentrated towards the garden, where it achieves more privacy, away from street, zealously hiding the outdoor life of its inhabitants.

In contrast, its main facade is perceived only tangentially, and extends throughout the site structuring the main body and the pool and garden shed volumes. The roof, with the slope and coating material set by regulations, becomes a unifying element of the spaces beneath, while shaping them, as it gets closer or higher to the ground, characterizing the more public or private rooms beneath.

It is difficult to assess progress of knowledge in a discipline such as architecture. We only have the intuition of having prevented a setback in the on-going construction of the world in that single point.